A tale of two buyers. I was selling a property I had acquired via a tax deed at an auction in California. One buyer wanted to hold out for title insurance, even though it was going to put him behind. He wanted to do a semi-agricultural use and plant various things on the land which needed to be planted at a certain time of year. However, because my quiet title court date was set a couple months off, it was going to put him a whole year behind for doing the planting.

A second buyer wanted the same property, so I told him about my quiet title action, about the law concerning tax deed properties, and about the fact that that despite the lack of a redemption period in California, title insurers won’t touch those kinds of properties. I also told him there was another buyer who held a contract that was unexecuted, awaiting my quiet title judgement a few months out.

All things being equal, it came down to whether or not title insurance was really worth it. For the first buyer, it was. For the second buyer, he knew he had until my court date to make a decision about that.

I told the second buyer I could sell to him without insurance, with the knowledge that he’d need to bring his own quiet title action after purchasing from me. After doing some title research and ownership research on me, was convinced that it’s a better way to go, especially since I was prepared to recommend my paralegal who can do all the work at a fraction of the cost of a lawyer, assist in communication with the court. He’d need to personally appear in court if there was a hearing. Side note: my paralegal says that many times there is no hearing at all. Ultimately, there was only going to be a couple hundred dollars difference between the two courses of action.

I told both buyers that it makes sense for me to sell the property to the first person who wants to give me money for it. I’m not a lawyer and don’t relish the idea of standing in front of a judge every time I want to sell a property with title insurance simply because title insurers are morbidly risk-averse. Morbidly? Yes, because the internet enables the general public to now do title searches themselves with a bit of education and a subscription to a data aggregation service. Morbidly, because when my buyer can do a title search and then seek a judicial ruling, he beats the title insurer at their own game. How?

Any judicial ruling will always provide more protection, certainty, and finality than some private insurance company’s commitment, especially given that title policies are full of holes in coverage and exceptions — like Swiss cheese that you can’t even eat. Knowing that title claims are at all-time lows, title insurance should be on the same endangered species list as the desert tortoise.

The other buyer, holding out for me to do the quiet title, lost. Even after I explained the exact same things to him, his preference was to wait for a title insurance company to issue a policy than to accept a more powerful judicial verdict. Luckily for both of us, I have more like-kind property that I can sell him, which won’t require a judge’s ruling. 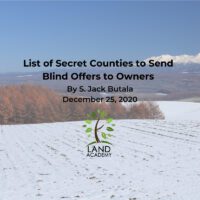 List of Secret Counties to Send Blind Offers to Owners

Which Envelope Would You Open? How to Buy Undervalued real estate with Direct Mail. 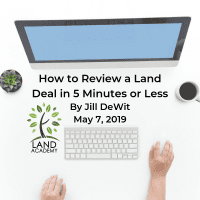 How to Review a Land Deal in 5 Minutes or Less

The Two Biggest Factors in Negotiating an Unbelievable Purchase Price