How to Hack Your Time Management (CFFL 494)

How to Hack Your Time Management (CFFL 494)

Jack:                      Welcome to our show today. In this episode Jill and I talk about how to hack your time management. What the heck is he going to talk about with this? Before we get into it, let’s take a question posted by one of our members on landinvestors.com online community. It’s free.

Jill:                          Okay. Matt asked risks … Oh, this is the topic of it, of this thread, which is with a question. Risks associated with letting people build an owner financed properties. Okay, so here’s the question. I have a number of folks who have purchased properties from me that are coming back and asking me if they can make improvements on the properties before they pay off your loan to me.

Jack:                      I can’t say this … I’m going to say it for more times probably before we’re done answering this question. Congratulations for the types of property and the deals that you are doing where they want to build on it and they’re visiting the property, and I love it, and they’re thanking you, and they’re calling you. You are doing every single thing right. The flip side of that is they go out, and see it and they hate it, and they want their money back. All right. So, that’s a problem. You don’t have a problem here. You have a fantastic situation for several reasons. What risks are you incurring? None, in my opinion. And I mean none. The only thing they can go wrong here is that they dump on the land, right? They put some, I don’t know, a refrigerator with Freon in it or some messy environmental scenario but that’s the only bad thing. So, now that we got the bad stuff out of the way, how do you win here? Let’s say they don’t pay the loan off. Now you own all the improvements that whatever they did to it, you own it.

Jack:                      The more time they spend there, the more stuff that they do and they like it or whatever happens the higher possibility that they’re going to pay the loan off. In fact, I would even venture to say this, and I’ve done this in the past with great success, “Oh, you know what Mr. Smith? If you really want to build a house, you want to clear the brush, an RV and you’re going to use a property like you really intended, what do you say we cut a deal?”

Jack:                      If they’re calling back and they’re saying, “This is awful, that you misrepresented it.” Which you never want to do, that’s a sign that you missed something. So in fact, the root of all lending. We did a show, The Root of All Evil Is Lending. I don’t know. It aired two weeks ago or a week ago. Or maybe it didn’t. Maybe it airs today, I really don’t know.

In the beginning, when lending became … When I suck at roots in, the whole idea was to lend somebody money to do something so they would intentionally fail and you would inherit how they’ve improved it. The roots of it go back to, if you look on the internet, lending to governments in South America so that they could mine their own property for resources whether it be timber, or stuff below the ground, or whatever. And then with intent to foreclose on it because they could never pay it. It’s evil. It’s terrible, terrible, terrible. Lending is … Listen to the show. It’s actually worth it.

Jack:                      So I’m not saying doing anything with malicious intent. I’m just saying, if for whatever reason they decide to stop paying and they’ve improved your property, worst things could happen to you. If you have a question or you want to be on the show …

Jill:                          Like the plague. Where are you going with that? You know one thing I love about you, Jack, is some of these statements are so open ended it could be anything. You know worst things could happen. And you just walk away. Like what where did he go? Wait.

Jack:                      All the husbands out there are nodding right now. Every once in a while, I become the fourth kid. So the kids do something bad when they’re all together to collectively … Not so much anymore because some are older, but somehow I get lopped into that. I get in trouble with them.

Jack:                      Recently I’m watching a show on Netflix or Amazon. I can’t remember which one. Called Mr. Robot and it’s about a bunch of kids who pull off the hack of the century and they need the Chinese hackers to help them. And the leader of the Chinese hackers, there’s a sentence. And I stopped. I stopped watching it and really had to think about it, and then obviously decided to do a show about it. The line was, you guys choose to hack computers, I choose to hack my own time. And what he really meant after I really thought about it was he takes his time very seriously and micromanages time. And so I started doing that this last week. I’m only going to spend this amount of time on this, only going to spend this amount of time on this, and guess what?

Jack:                      [crosstalk 00:08:08] no but because we have these phones with the timers on them. But take your time seriously. I mean it. Even if you’re going to have a meeting with somebody who is below you, this is how I used it. Make sure the meeting is four minutes and that’s it. And tell the person, “I have four minutes to talk to you about this.” Not with disrespect, just this topic to me and how important this is and the goal that I’m really trying achieve, which is to make a bajillion dollars and I had to work anymore. But don’t say that. Just say it to yourself, this conversation in the scheme of things is worth four minutes.

Jack:                      Hack other people’s time. There some people … We have a really good crew right now working for us. And there’s a couple people that are not the best managers of their own time. And so, if you teach them, you don’t tell them what to do and order them around, but you teach them your priorities and stuff. They’re going to start to manage their time better. Heck, you’re hacking their time.

Jill:                          But you do have to … It’s a process. You learn it and you have to teach somebody else too, really how to prioritize. And let them know that it’s okay to stop. Well, here’s something that I have done in the past with people as I’m helping them. I say, “All right. I need you to spend one hour on this. Give me an executive summary. Whatever you come up with in one hour, the best three sources for X. Whatever the project is.” And that’s it. And it forces them to cut it off. And you go crazy for an hour because you could spend all day on it and you really don’t need to spend all day on it. Because the results all day are probably going to be the same results that you just been an hour on. Don’t overanalyze yourself on any of it.

Jill:                          So that by doing things like that, not only setting those limits on yourself, but helping people who work for you or your associates, that’s great advice. It’s going to save a lot of time, and energy, and stress, and free you up for the fun stuff. Like drinking champagne out of women shoes at the store. 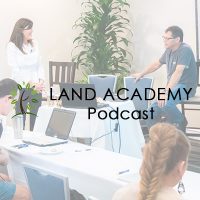 Preppers Have Now Been Verified They Need Land (LA 1211)