Steven Butala:                   Today, Jill and I talk about the three biggest roadblocks in creating real estate wealth that we see. We are actually qualified to do this show.

Steven Butala:                   Before we get into why Jill’s laughing, let’s take a question posted by one of our members on LandAcademy.com online community, it’s free. Jill laughs all the time by the way.

Steven Butala:                   It’s a lot smaller than that. That’s our primary residents by the way, so don’t let the size fool you here, but what I would do, and I don’t wanna be overzealous about buying this property is I would look on Google Earth and see what’s around it, immediately around it. If all the other lots are 50 by 100 and a few of ’em have structures on ’em, and everybody in the area or some people in the area figured it all out, the utility piece and the whole thing, that’s a run to the bank situation. This isn’t a run to the bank situation, but this is get in our medium rotation.

Steven Butala:                   Today’s topic, the three biggest roadblocks that we see people experiencing creating their own wealth in real estate. This is the meat of the show. I know Jill, before we get started, wrote down her own roadblocks, and I wrote mine down and we have separate lists, so I’d love to hear yours first.

Jill DeWit:                            You want me to go first, okay. The first roadblock that I think is comes … People come across is personal. They are either scared, they’re in their own heads, not sure they can do this, or they’re complacent in their jobs, so they think they wanna do it, but they … It’s all personal and it’s emotional, and they have to mentally get there, that’s my number one.

Steven Butala:                   That’s actually my number two. I’ll tell ya, I’ve had very bright people come to me and say and in a constructive criticism way about how we teach, have had them say to me, “It’s really hard for me to get my head around this because you guys make it sound so easy and you do it every day. So when I fail at it, it’s gonna make it three times as bad.”

Steven Butala:                   That’s a perfect example of are you gonna let somethin’ like that … Are you gonna let it break you down and bring it to your knees, and I say this to the kids all the time, “If you’re gonna get a bad grade, does it mean you’re a stupid person?”

Jill DeWit:                            Right, thank you. That’s … It was like, what’s funny is, I want everybody to know this, this is gonna happen. This hap … The transaction was from January, this is now April. You can have things get recorded and get in the system and you think it’s goin’ through and then it hits on the last person’s desk, often the assessor, and then they go, “Oh this isn’t right.” But it went through all the other channels-

Steven Butala:                   If you’re doing your own deeds, in this business sometimes you just … It just ends up happening without using a title agent, you’re gonna make some mistakes.

Steven Butala:                   So it’s all emotion. Emotion like Tony Robin’s is famous for saying that ’cause of the single thing that trips everybody up to accomplishing whatever it is emotion.

Jill DeWit:                            Well that’s important too. Life stuff getting in the way, I get it, but also sometimes you don’t have the right person in your life that’s that supportive. It doesn’t really matter what idea you’re bringing to them, they’re not supportive, and it might be your fifth idea that you’ve tried and it doesn’t mean not try. That happens too.

Jill DeWit:                            My number three is, the third biggest roadblock creating real estate wealth is sometimes there’s realistic things in your way that you need to finish first, like for example, you gotta keep your day job, you’re payin’ off some debt, you’re a year away maybe, whatever it is, it’s realistic, you need … It’s not … Sometimes there’s things that you shouldn’t jump ship yet, and start something else without finishing that thing. Maybe, does that make sense?

Jill DeWit:                            Maybe you’re finishing off paying for your college, maybe you’re almost done getting your PhD, or who knows what it is, I don’t know. This come along … This has come along, you’ve already invested so much in it. I would say be realistic, finish that thought or that whatever it is, then make the transition, so … ‘Cause you wanna do this right.

Steven Butala:                   My number three is once you get into it, I see people fail and I see this, the most intelligent people that I see fail at this are it’s because of follow through.

Steven Butala:                   I think it’s a time commitment. I’ve seen some extremely bright people get into this and think that it’s gonna happen in a weekend, they’re usually younger. Maybe it’s all in their head and they don’t really wanna succeed. But I believe … I thought a lot of this, before I met you, is a bunch of crap. When honestly-

Steven Butala:                   Here’s what I do every day because I have issues with follow through. I’m behind on our mailers right now, that’s the truth and it’s because I get sidetracked with other crap like IT issues and staffing issues, and all kinds of stuff. So my answer to that is this, I put everything in a calendar, and I create a system for people under me, sometimes they’re overseas, sometimes they’re part of our staff to … It gets all systematized and I watch them do it. We pay three to four [inaudible 00:14:39] dollars for overseas staff to do tasks for us, and if I tell ’em to do it on Wednesday, ’cause it’s in my calendar on Wednesday, on Thursday morning it’s done, and it’s there, and I have to spend 20 minutes on it to get it into the mail. Even I fail at that follow through sometimes, and that’s just the way it is. That is the … My number three is really my number one, the biggest roadblock for me making even more money than we actually make.

Jill DeWit:                            Well that’s true, but again, I wasn’t talking about you, but that’s one of the ways that I describe it for other people sometimes. Other people I think follow through might be, you might think differently and you’re allowed to, you think it’s different?

Steven Butala:                   You can’t say, ‘Hey I think you’re used to …’ You put on a cheerleader hat sometimes, Jill, which is good for a lot of people around you, but if you have to cheer lead your way into motivating somebody, it’s … Once you’ve stopped cheerleading, it’s just gonna fall back down to where it was.

Steven Butala:                   You have to figure out, you have to put a system in place and stick with it no matter what happens, and that’s way, way harder to do. It’s a lot easier to say than to do, especially been there’s not a lot of people involved, and there’s employees that are doin’ stuff or not doin’ stuff. The truth is if we didn’t have this membership group, these membership groups now, and 19 websites to manage and all that, we’d probably be makin’ a lot more money.

Steven Butala:                   Well you’ve done it again, you’ve spent another 20 minutes listening to the Land Academy Show. Join us tomorrow for another interesting episode where we talk about taking land orders online, processing acquisitions and sales online versus on the phone, and I bet you can figure out which one’s more efficient.

Steven Butala:                   You are not alone in your real estate ambition. This is a really interesting nebulous topic about why people don’t follow through.

Housing Market is Back and so is House Academy (HA XYZ)

Rational Growth and Cash Flow in the Land Business (LA 1644) 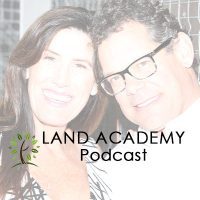