Steven Butala:                   I think it’s, in its current form, is really silly, but we’ll talk about that in the show. Before we get into it, let’s take a question posted by one of our members, on the landinvestors.com online community. It’s free, and as you’re listening please drop your questions into the comment section below.

Steven Butala:                   The best way to … Unfortunately it’s probably not going to be good news. Deals like that are cross-collateralized, so … We’ve all seen this. If there’s a house and a vacant lot next door, and they’re being sold together, and they’re two EPNs, if you’re lucky there are actually two EPNs. Banks love that, because you just kind of look, and buyers love it. It’s like getting a free piece of property.

Steven Butala:                   I could be completely wrong until you get into that mortgage. Maybe there’s two mortgages. I doubt it. I don’t know, that’s an interesting situation. I kind of like those deals.

Steven Butala:                   He calls one of his buddies, or I call another buddy, and we all agree, and I’ve raised the $10 million dollars through people that I have personal relationships with, or family, or whatever. I buy the asset. Let’s say we start an LLC, and then in a perfect world we own it for just a very short amount of time, and resell it. People who buy commercial real estate, the vast majority of institutional real estate owners, commercial real estate owners are looking for their exit as quickly as possible. There’s all kinds of issues associated with that. That’s why using equity and debt together can, they can cause problems unless you know the outcome right before it’s going to happen, which is the perfect situation.

Steven Butala:                   Anyway, this $10 million dollar building gets sold for $15 million six months later, and we all split the pie up according to the percentages that we put it. If I didn’t put any money in because I found it, but I negotiated a 6% kind of deal to manage the asset, and manage the sale of it, I take my cut, and then what happens is those guys never leave you alone again. All they ever want to do is give you money constantly, because they got they return that they wanted, or a real good return. In that case 50% on their money, in six months, that’s crazy. Actually, those are kind of our numbers, so …

Steven Butala:                   That’s the idea of crowd funding, and the Internet’s made that possible. Now we don’t have to call the people we went to college with, or anything of that, and get into a smoky, dark room somewhere, and cut a deal. It’s a great idea. Here’s what happened. In the 20s, and 30s, and 40s, people were selling stock for companies on Wall Street, to people who were living on Main Street, and cleaning out their savings accounts. It was all fraudulent based, so the SEC, Securities and Exchange Commission, regulated and then consequently, like everything in this country, over-regulated the whole thing. It’s making it really difficult.

Steven Butala:                   If you want a real estate crowd fund, you are generally put into two categories. One, an accredited investor, so you have to go through this process, which is loosely defined. You have to have a couple hundred thousand bucks. If you’re married it’s 300, 400 thousand liquid, prove it all, and then the other category’s the rest of us.

Steven Butala:                   The SEC is protecting the rest of us, so there’s two ways to get around this. Number one, and I’m not advocating getting around the SEC. You know, I have to say stuff like that, I just do. This is a top broadcast show. Number one, have a membership group like we have with Land Academy, where you’re in it for a long time, and you sign some stuff, and you understand it, and you’re just not some schmo off the street.

Steven Butala:                   Number two, the second way to get around it, is to not charge anything for it at all, which is what goes on with companies like Kickstarter. They’re just in it to get the traffic to the website, and get some notoriety, and maybe eventually sell the website, which this probably happened. I don’t know.

Steven Butala:                   In good Steve and Jill form, we’re doing both. We do have a membership group, and we’re not charging anything at the moment, so that’s what crowd funding is all about. We’re taking the concepts of commercial real estate, which has long been around, and applying them to lower cost, high margin real estate products, like rural, vacant land, ranches and wholesaling houses. So far it’s working great. We have a massive response.

Steven Butala:                   What we’re trying to do is to take that concept and make it so that people who are interested in doing this can go online, in a relational database, watch these deals happen, and get real comfortable with it, and put money in, or deals in.

Steven Butala:                   I can’t think of a faster way for somebody who’s new and really aggressive and bright, to learn than in CRM like that, online watching someone who’s 20 years older do a deal and how to do it.

Steven Butala:                   The guy who’s 20 years older, that’s me, watching the young person, from a tech standpoint and how they think, there’s a huge benefit. It’s a two way street, so real estate crowd funding is awesome. It’s just the regulations and some of the other stuff that are in place that kind of stand in the way, but …

Steven Butala:                   There’s a company called, Fund Rise that’s been doing this. I’m not sure they’re doing it legally. I haven’t looked at it, into it enough. There’s a couple other ones that have been around for a while, but it seems to me, I think they’re all accredited investor driven.

Steven Butala:                   My whole goal is to get 15 or 20 people, and then beginning to test it. Everybody can see it. If you’re a Land Academy member, you can just logon and watch. You can’t participate yet, until we get these 20 people that are, have really kind of orchestrated this thing with us. We’ll put all the completed deals that we have in there so you can see. This is all theory now, and you can watch it happen the same way ultra-rich, you know, Donald Trump/Sam Zell level commercial real estate people have been doing this for years and years, and years, only we’re applying it to wholesale houses and …

Steven Butala:                   Well you’ve done it again. You spent another 15 minutes or so listening to the Land Academy Show. Join us next time, where we discuss why playing at your level is imperative. 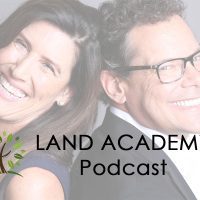 How Much Monthly Income is Right for You (LA 1373)