by Jason Cochard for Land Academy

One of my deals is coming full circle this holiday season, and even though the bank is dragging its feet collateralizing some of my buyer’s other land in order to approve this purchase, I wanted to take a quick moment on Christmas Eve to show how the spirit of giving is alive and well in these deals, and how everyone participating in a deal will win when we do it right.I was supposed to close on Dec. 21, but the bank is taking too long on some papers. It was supposed to be a good old fashioned Christmas closing, but now I guess it will be a good old fashioned New Years closing. So before I get into anything else, I guess it’s worth me saying that I believe institutions don’t have a spirit of giving because they’re not human.But for the humans, this deal was an exercise in both sacrifice and winning. Each party got a little less than they could have, but simultaneously got something they really wanted. Here’s the cast of characters.The Seller — I’ll call him Scrooge. Scrooge bought a property at a tax lien sale and once the deed was issued a few years later, he tried to fleece the neighbors and sell for a 160,000% ROI (that’s mathish for “greed”). Naturally, this didn’t happen, and the neighbors resented him for it. They’ve never spoken since.The Neighbors — I’ll call them Bob and Martha Cratchit. A salt of the earth couple working a cattle ranch they own in a river valley in the heart of the country. A healthy, functional cell in the lifeblood of America, participating in the ground level of any human economy: agriculture and ranching.

Like the Dickens characters, they don’t have a ton of money, but they do have integrity. Me, — The Ghost of Christmas Present. I am just a land investor. But because of the rift created by the seller in his curmudgeonly past, it is only through this deal that he will realize any blessings from the tax lien purchase he made so long ago. Hopefully, the actions taken by the Ghost of Christmas Present will teach Scrooge about being a better giver.This story follows A Christmas Carol pretty well actually. On the acquisition side, Scrooge wanted every penny of the offer. He wasn’t willing to pay a dime for closing costs, title insurance, and he required me to pay for a traveling notary instead of him traveling to the title company for closing. The entire amount on the offer is what he got, and on his side of the deal, when all the difficult personality issues were out of the way, he ended up making a 12,000 ROI% on his tax lien purchase. Not quite as well as he would have done with 160,000%, but he must have learned something about leaving money on the table in the name of speed and liquidity. Despite the diminished amount, he got his reward first. Merry Christmas, Mr. Scrooge. On the sale side, Bob & Martha Cratchit have been seeing this neighboring parcel go fallow for years, maybe decades. It is a thorn in their side, and when I contacted them about selling, they agreed to a price quickly, aware how my angle worked and not begrudging me making some money on the deal, and knowing the price was within a fair range but unsure on how they’d raise the money. Ultimately, an appraisal came back below our agreed purchase price, their bank was willing to fund less than the purchase price. Rather than revise the deal with me, potentially causing the deal to fail, they collateralized some other land they owned in order to raise additional bank funding and honored our original price. Could they have held out for a better price? I don’t know, I think it probably would have killed the deal.

So to cure their eyesore, they were wiling to give a little more at closing to gain a very special piece of land at Christmas.And me, the ghost of Christmas present. I call myself that because it’s so ethereal the way data leads us to our sellers (and sometimes to our buyers), that it seems like a ghost or spirit is the only way to describe how I found myself possessing land in such an unlikely place. There would have been zero chance of me ever visiting that parcel in any other circumstance. Plus, being the first mover I guess I’m the guy making it rain, giving rewards to seller and buyer assuming we all sacrifice a small amount to make the deal work.So in the end, Scrooge sacrificed some ROI, the Cratchits sacrificed a higher than ideal purchase price. And my sacrifices were a slight ROI reduction and the fact that it took FOREVER to get the deal done, with so many uncertainties along the way. I might have walked away several times in the beginning due to the seller’s personality quirks. I might have walked when I heard there was an institutionally-financed sale side. And I could have gotten greedy and held out for more money (I didn’t make my target ROI, but I was close). After escrow fees I’ll make even less than the seller did, but that’s fine because other than those difficulties, the money is basically free. His unnaturally low cost basis on the tax lien cost him less than a year of Netflix, where I’m sure you can rent some version of A Christmas Carol.So Merry Christmas everybody. Everyone wins when we maintain a spirit of giving and each party in a deal makes some sacrifices. When I look at this deal, despite everyone’s “sacrifices,” I don’t see any scarcity there at all, only abundance for all parties. There were no losers in this deal, except possibly our egos. And that might be the most important lesson that I’ve taken from it, that these sacrifices are mostly ego-driven. To reinforce that abundant feeling, it feels really good knowing that a salt of the earth ranching family will be able to restore productivity to a parcel of otherwise fallow land, held for so long by a greedy Scrooge. Hopefully he’ll sell me something else in his inventory next. 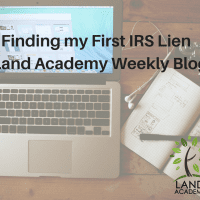 A Peek Into My Offer Pricing Process Pt.1

Days on Market The Great Equalizer (Local, not National)