Jack:                     Claire I am so proud of you. You are one of our original members and you’re just killin it. And this is yet another incredibly intelligent question from you. Yes, this is what we do. It gets complicated, but I will tell you for the more sophisticated database people out there that are in our group or not in our group doesn’t matter this is how you do it …

In a whole subdivision we’ll use a thousand property example. There’s a thousand properties in a subdivision and let’s say two people own, you know, a ton of them. Which this is a real life example. It happens all the time. Usually the people who own a ton of them are like Jill and I. So you don’t want to waste fifty cents on sending duplicate offers at all. You never want to do that. So you run through the mail merge or you call somebody at offerstoowners.com, which is one of our companies. They’ll do it for you. You run a mail merge that says … With all the single property owners, right, and now you’re done with that and you get the offers in the mail. And now what you have in the tech world or the database world is an exception. You deal with these exceptions at the end.

And so if there’s those two people that own a ton of properties … If you’re brand new or if you’re new to data, you can manually just copy and paste them in or you can run a duplicate data base filter which creates a separate type of offer and now you’re only spending fifty cents to send an offer and it adds it all up for you. Fifty properties, or eighty properties, or a hundred properties.

So, Claire reach out to me. I’ll help ya. We have a little custom application that we wrote a lot of years ago that we run the data through and it separates the two. It’s on my list to share with everyone.

Jill:                        It’s so interesting. I keep telling people hang in there. Give yourself ten deals make a whole lot of mistakes. Don’t spend a lot of money. Do ten one-thousand dollar deals whatever it is. Let’s double your money. Get out. One goes sideways, okay, now we’re at nineteen-thousand instead of twenty-thousand, we put in ten, that’s okay. So, you’re still way ahead. Now, let’s start making some different decisions, which you can now decide how you wanna go and what you wanna do. And she’s doing multiple parcels and some people are subdividing. We’ve got all kinds of great things going on.

Jack:                     There’s a couple more points in this, simple points in this. You never wanna exclude those people. Those people are the investors so they’re also the people who might buy the property that you do end up buying. They already have a bunch of property. The subdivision are there for a reason. So, they should be an A-list buyer in that specific mailer. What you never, never wanna do is … because it’s complicated from a data standpoint, is just blow it off. At the very least, you wanna send them one offer. With even a handwritten note that says “I know you have a bunch of these, give me a call.” They will call you. Investors call you back. For sure.

Jack:                     If you have a question or you wanna be in the show, reach out to either one of us on landinvestors.com. Today’s topic: the number one reason people fail at anything. This is the meat of the show. This is a Jack-ism. I mean, I didn’t read this anywhere, this is just my … Professing my … Hey listener, you don’t pay for this so I get to say what I want.

Jack:                     For years … Since the beginning of time people have been using PayPal to take payments on land online. The original people in this business, I’m one of ’em. And then one day PayPal woke up and said, this is a lot of years ago, “ya know, taking payments is not part of what we agreed … You signed this agreement, you agreed not to involve real estate. We thought you were selling beanie babies. You have ten seconds to terminate this.”

All of us were left high and dry. We all gravitated towards whatever next credit card company, same thing. Then it was Stripe. Take payments to Stripe. Then it was Blue Pay, more recently. Blue Pay did the same thing. Finally, I got, two weeks ago, I had it up to my eyeballs with this and a member called me and said, “I have a personal relationship with a company that is the underwriter for all these other companies. They’re the underwriter for PayPal. Why don’t you just go to the horse’s mouth and see what we can do?”

So, I spent a couple of days on this and the short of it is this … We are … We started a company, Jill and I, called JillPay.com, the website is not anywhere near being active yet and we will become Stripe or Blue Pay or PayPal and I have it in writing that these guys are like, “we love your business, we love real estate, and we’re gonna make sure that all the people that you’re affiliated with, in any type of real estate, landlord payments, any of that stuff, is an accepted and encouraged type of transaction [crosstalk 00:11:23]

Jack:                     And I never had any … That’s been a theme. When we started Land Academy, almost that same day, what we realized is that everybody who’s buying and selling property is running into the same stuff that we solved several years ago. Which CRM do you use? Who answers your phone? On and on and on. So, Jill and I … If you go to landinvestors.com you’ll see all the products that we’re releasing this year to solve all those problems. We’ve already solved them internally, but they’re just not in any type of presentable format yet. So that’s what we’re doing. That’s what Land Investors is. It solves all those problems that take the emotion [crosstalk 00:12:13] out of it. Take all the hard work out of it.

I just thought … It just came to me like, it’s a perfect example of how we will not stop. We’ll figure out a way.

Jack:                     And then, of course, property changes hands all over the country every day. So the data update, once you have that 148-million data set licked, which we have, by the way, it just becomes updates. Updates, updates, updates. And it’s when you really break it all down and deconstruct it backwards, it’s not that hard.

Why Offers2Owners is Hitting Records (LA 1171) 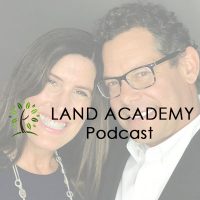 Mailing for the Market Not Your Bank Balance (LA 1087)